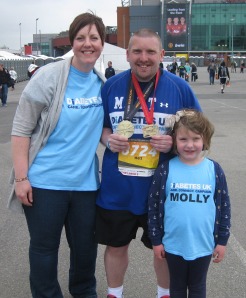 A paramedic from West Midlands Ambulance Service has successfully completed his challenge of running two marathons in eight days.

Matt Turvey’s 52 mile challenge began in London on 21st April and ended when he crossed the finish line of the Manchester Marathon on Sunday 28th April.

Matt, who is based at Stoke Ambulance Station, was inspired to raise money for Diabetes UK on discovering a former colleague’s son and his daughter’s (Molly) five-year-old classmate, Harry, had been diagnosed with type one diabetes. Despite being insulin dependent and having to undergo numerous invasive injections and finger pricks each day, Harry has taken it all in his stride.

As a paramedic, Matt is often called to emergencies that are diabetic related and he repeatedly sees the effects that the condition can have on patients.

Talking about his challenge Matt said: “I’d like to say a massive thank you to everybody who has supported me on this journey; for all the words of encouragement and more importantly the donations to Diabetes UK.

“We have raised approximately £2628, with more money to still come in. I really am overwhelmed with all the support I have received, which has helped me to exceed my original target of £2,000.  Special thanks go to my wife, Jenny, who orchestrated much of the fundraising and allowed me the opportunity to train and complete these runs!”

On the run up to Matt’s gruelling challenge, Hary too had been undertaking a number of trials of his own and has now successfully been fitted with an insulin pump, which means less injections and a more stable balance of his diabetes.

Mat continued: “It was brilliant news to discover that Harry was suitable for an insulin pump. He truly is an inspiration and I am proud to have raised this money for such a worthwhile charity.”

Pictured: Matt with his wife, Jenny and daughter, Molly.