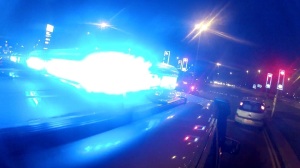 A man has died following a two car crash in Coventry last night.

One of the Trust’s ambulances came across a two car road traffic collision on Ansty Road, near the junction of Hocking Road, shortly after 10.20pm yesterday evening and called for emergency back-up. A further two ambulances, a paramedic area support officer and two MERIT trauma doctors attended the scene.

A West Midlands Ambulance Service spokeswoman said: “When the ambulance crew stopped to help, they found two cars which had been involved in a collision.

“The driver of one car, a man, was seriously injured. Ambulance crews administered advanced emergency treatment at the scene before conveying the man by ambulance on blue lights to University Hospital Coventry and Warwickshire. Sadly, despite the best efforts of ambulance crews and hospital medics, nothing could be done to save the man and he was confirmed dead at hospital.

“The passenger from the same car, a woman, and the driver of the second car, a man, both sustained minor injuries. Both were taken to University Hospital Coventry and Warwickshire as a precaution.”