At times of adversity, the British population pulls together. It was no different for ambulance services when there was a request for mutual aid from South Western Ambulance Service to help deal with the extraordinary scenes on the Somerset Levels.

West Midlands Ambulance Service, like all English Ambulance Trusts, agreed to provide additional staff to work in the flood affected area, which covers around 25 square miles.

They joined colleagues from South Western Ambulance who have been providing teams of specialist paramedics, 24 hours a day, ready to deploy into the devastated areas to provide medical help at a moment’s notice.

The staff, who are all part of the Hazardous Area Response Team (HART), are trained to operate in challenging conditions such as fast flowing water and can use their skills to rescue people from dangerous situations despite being in need of medical assistance.

West Midlands HART Support Manager John Woodhall, who is a water rescue specialist, said: “When we were asked to provide assistance, every one of our staff volunteered to help out. Over the last two weeks, HART staff from all over the country have been assisting.

“The team of two we sent down said that although much of the water had receded, the level of destruction they witnessed was appalling. Entire communities had been devastated.
“Every member of HART, wherever they came from in the country, was pleased to be able to offer their time to try and help out in any way they could whether simply carrying out welfare checks or dealing with people in need of medical assistance.

“For many staff, it was the first time they have had to operate in such a way for real; however much you train, it is never the same as an actual incident.”

Chris Chambers, Head of Emergency Planning and Resilience at South Western Ambulance Service said: “This national mutual aid has provided a very significant assistance to our own team, ensuring that we could continue through the extended period of this operation.”

After 10 days of assistance (3rd – 13th March), the mutual aid has been stood down now that the flood waters have started to recede.

Martin Flaherty, Managing Director of the Association of Ambulance Chief Executives added: “Within hours of the request being made, staff were en route to the South West using national assets so that local services would not be affected. The whole operation was co-ordinated at the National Ambulance Coordination Centre (NACC) which is based at London Ambulance Service Headquarters.

“Because all of the HART teams are trained nationally and use standard equipment, it made no difference where the HART paramedic came from.

“We will be debriefing the staff to see if we need to make any changes to the training so that we can take the service we provide to patient to an even higher standard.” 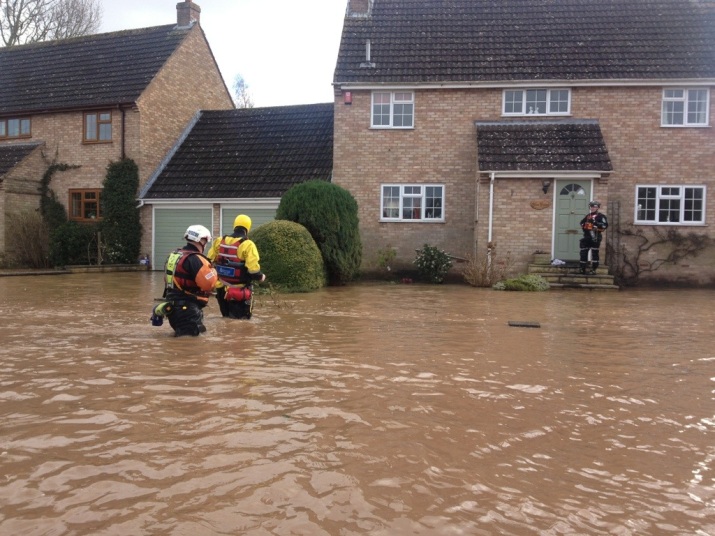 The above pictures are examples of ambulance HART staff working with police and fire colleagues in Worcestershire but illustrate the sort of conditions being experienced in the Somerset Levels.