A woman driver whose car left a road and went up an embankment, has suffered back pain.

West Midlands Ambulance Service was called to the A500 at its junction with the A34 at Talke at 3.45pm today.

A West Midlands Ambulance Service spokesman said: “The car she was driving left the A500 and went up a bank through some trees. There was significant damage to the car.

“Its driver, a woman in her twenties, had lower back pain. The fire service cut off the car’s roof and she was removed from the vehicle on a spinal board.

“She was immobilised, given pain relief and was taken to the University Hospital of North Staffordshire.” 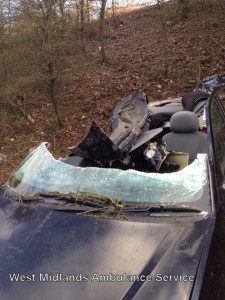