A man out walking along a bridle path with his girlfriend hit his head on a bridge, but because neither of them knew exactly where they were, a detailed search for them began.

West Midlands Ambulance Service was initially called to the described location of near a bridge off Coventry Road, Cubbington in Warwickshire at 9.05am today. The man had reported felt drowsy, had difficulty breathing and was nauseous.

A paramedic in a rapid response vehicle headed there first and, on arrival, got out of the car and began searching on foot. He found the patient’s girlfriend who then tried to show him where her partner may have been.

The Warwickshire and Northamptonshire Air Ambulance was dispatched. West Midlands Ambulance Service’s control room was speaking to the patient, a man in his twenties, on the phone and told him to make himself known when he saw the helicopter flying overhead. The control room stayed on the line until the helicopter arrived.

“The man had back pain. It wasn’t known how long he had been exposed to the weather and he was wrapped in a blizzard blanket before being flown to University Hospital Coventry and Warwickshire.” 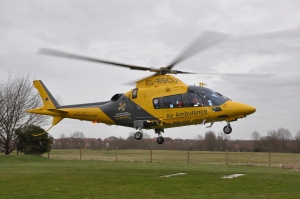