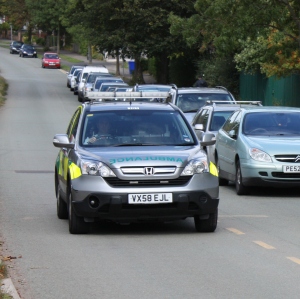 A man has been rescued from a park after falling from a skateboard in Staffordshire today.

An ambulance, a rapid response vehicle and a paramedic area support officer were dispatched to the scene. The fire service were also in attendance.

A West Midlands Ambulance Service spokeswoman said: “Crews arrived to find a man who had become injured whilst skateboarding at the park.

“The man, who is believed to have been visiting the park with his family, had fallen approximately 15 feet into a tiered skateboarding bowl and had sustained a knee injury.

“Due to the difficult location of the incident the casualty was fully immobilised and brought down to safety, with the assistance of the fire service who used a variety of equipment including ropes and ladders.

“The man, believed to be in his 20’s, was treated at the scene before being conveyed to Leighton Hospital for further assessment and treatment.”