Two cars have collided in Warwickshire and ended up down an embankment with one on its side and on top of the other.

Three ambulances, an advanced community paramedic, a paramedic area support officer and the MERIT trauma team consisting of a doctor and a critical care practitioner attended. A local off-duty GP gave her assistance. Police and the fire service also attended.

A West Midlands Ambulance Service spokesman said: “Both cars left the road and went down an embankment. One ended up on its side, up against a tree and on top of the other. There were two men in their sixties in the car on its side, both of whom got out uninjured. They were both discharged following assessments at the scene. 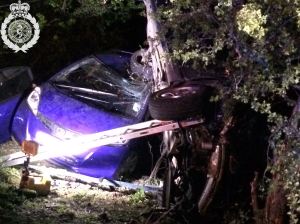 “A man in his sixties who was driving the other car was trapped in the vehicle. The fire service helped make the area safe for the ambulance crews to reach this driver and assess him. He had a head injury. He was immobilised and freed from the car. His condition was stabilised en-route to University Hospital Coventry and Warwickshire whose trauma team was on standby in readiness for his arrival.”