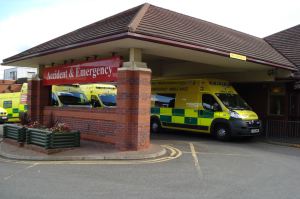 The driver of a lorry that overturned on the M42 early this morning was helped out through the windscreen of the cab by ambulance staff.

The articulated lorry ended up on its nearside next to the central reservation and across lane 3 and 2 between junction 4 and 5 on the northbound carriageway.

An ambulance, a rapid response vehicle, a paramedic officer and the MERIT trauma doctor were initially sent to the scene after a number of 999 calls at around 2.00am this morning (Thursday).

A West Midlands Ambulance Service spokesman said: “The driver was trapped for a short time. Although he could stand up within the cab, he wasn’t able to get out until firefighters removed the windscreen.

“The driver was complaining of back pain and some discomfort in his left leg.

“As a precaution, he was immobilised using a neck collar and spinal board before being taken to Heartlands Hospital for further assessment.”