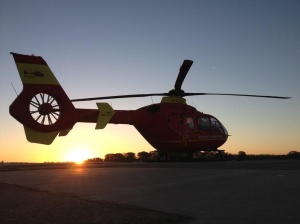 Five men required hospital treatment, one of whom had to be airlifted, following a serious road traffic collision in Nuneaton this afternoon.

The crash occurred on Atherstone Road shortly after 3.50pm and West Midlands Ambulance Service sent two ambulances, a paramedic in a rapid response vehicle and a paramedic area support officer to the scene together with the Midlands Air Ambulance from Staffordshire and the Warwickshire and Northamptonshire Air Ambulance.

A West Midlands Ambulance Service spokesman said: “Crews arrived to find two cars that had both suffered significant damage in what was clearly a serious collision.

“There were five male patients who required treatment from paramedics, three in one car and two in the other.

“One of the men, who was reported to be 46-years-old, had suffered a fractured leg together with arm, neck and head injuries. He was immobilised and given pain relief before being flown to University Hospital Coventry and Warwickshire.

“A second man from the car, believed to be 23, was treated for chest and leg and facial injuries. He was taken to the same hospital by land ambulance.

“The third patient from the car also went to the same hospital by land ambulance suffering with back injuries.

“From the second car, two further patients were transported to University Hospital Coventry and Warwickshire, one of whom was suffering from a suspected fractured pelvis.”