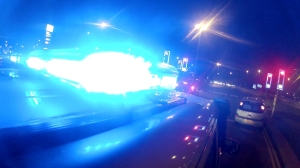 A man required extensive emergency pre-hospital care after being trapped for over an hour in his car following a collision with a road sign in Birmingham last night.

A West Midlands Ambulance Service spokeswoman said: “The single car had been involved in a significant collision with a large road sign causing extensive damage to the vehicle.

“The driver and single occupant, a man in his 30s, was trapped in the wreckage sustaining a chest injury, a fractured pelvis and significant fractures to both legs. The ambulance crews and the doctor worked as a team to deliver vital pre-hospital care at the roadside to stabilise the man’s condition whilst the fire service’s technical rescue unit began the difficult process of cutting the man out of the car.

“Due to the protracted entrapment and serious nature of the man’s injuries, the doctor initially requested blood to be delivered to the scene. However, once the man was released from the wreckage, after just over an hour, the blood was cancelled as the patient no longer required an emergency transfusion.

“The man was fully immobilised with a neck collar, spinal board, leg splints and a pelvic splint before being alerted to Queen Elizabeth Hospital Birmingham where a trauma team were on standby to receive the patient. The doctor travelled in the back of the ambulance with the patient to continue treatment en route.”