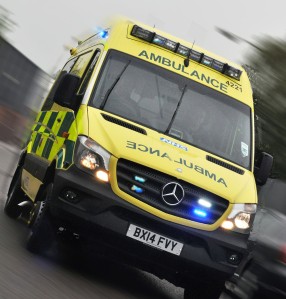 An elderly man whose mobility scooter collided with a lamppost in Dudley this afternoon is in a critical condition in hospital.

West Midlands Ambulance Service was called to Farm Road in Netherton at 1.00pm today (Monday). Two ambulances, a paramedic area support officer and a MERIT trauma doctor were sent to the scene.

A West Midlands Ambulance Service spokeswoman said: “The man’s mobility scooter reportedly lost control and collided with a lamppost and concrete pillar in the incident.

“The man, believed to be in his 70s, was trapped underneath the scooter for a short period. When ambulance staff and the medic arrived, the man was unconscious and upon assessment was found to have sustained a serious head injury, fractured ribs and a significant leg injury.

“As a team, ambulance staff and the doctor worked to stabilise the man’s deteriorating condition at the scene by administering fluids, pain relief and a drug to reduce bleeding. The man’s seriously injured leg was placed into a splint and he was immobilised further with a neck collar and spinal board.

“The man was taken by land ambulance on blue lights to a major trauma centre, Queen Elizabeth Hospital Birmingham. The trauma doctor travelled in the ambulance to continue treatment and monitoring during the journey. Upon arrival in A&E the man’s condition was said to be stable but critical.”