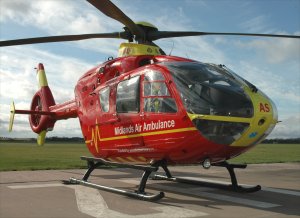 A man has been airlifted to one of the region’s major trauma centres after falling approximately 15 feet from the roof of a property near to the Shropshire / Welsh border this morning.

West Midlands Ambulance Service was called to a property in Winnington, Shrewsbury just before 9.00am (Monday). An ambulance and the Midlands Air Ambulance from Cosford with a MERIT trauma doctor on board attended the scene.

A West Midlands Ambulance Service spokeswoman said: “The 42-year-old man had reportedly fallen, approximately 15 feet, from the roof of a two-storey property before landing onto a concrete floor.

“Upon assessment, ambulance staff discovered that the man had lower back pain and was experiencing a loss of sensation and movement in both legs. Medics administered pain relief and anti-sickness drugs to the man before carefully immobilising him onto a neck collar and spinal board to prevent further movement.

“Once stable the man was airlifted to University Hospital North Staffordshire, a major trauma centre, for further treatment.”