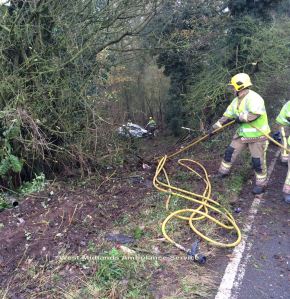 A woman has been taken to hospital after her car left the road, went through a hedge and fence before careering down a 50 foot embankment.

West Midlands Ambulance Service was called to Seeswood Close, Nuneaton at just after 10.50am.

A West Midlands Ambulance Service spokesman said: “Crews were on scene within minutes to treat a woman in her twenties for serious head and pelvic injuries.

“The car received significant damage and the patient was trapped before being released by emergency services.

“Local fishermen were first on scene after they left a nearby fishing pool to aid the patient.

“The patient was sedated by medics and immobilised with the use of a neck collar, pelvic splint and placed on an orthopaedic stretcher before being conveyed to the University Hospital Coventry and Warwickshire for further assessment and treatment.”