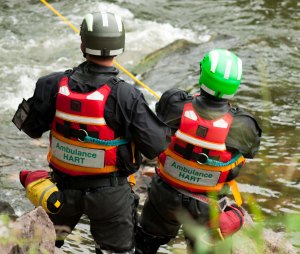 A man has been rescued from a cliff face at a Black Country beauty spot this afternoon.

West Midlands Ambulance Service was called to the Wren’s Nest National Nature Reserve in Dudley at just before 1.30pm.

An ambulance and the Hazardous Area Response Team (HART) attended the incident.

A West Midlands Ambulance Service spokesman said: “Crews arrived to find a man had fallen about 10 metres down a cliff face after apparently suffering a medical episode.

“A man in his twenties was treated for neck and back pain.

“The patient was assessed at the scene before being brought to safety in a basket stretcher lowered by rescue ropes. The HART team worked with fire service colleagues to rescue the man from a ledge in the vicinity of the Severn Sister caverns.”

“The patient was eventually taken by ambulance to Russell Hall Hospital for further assessment and treatment.”