An opening ceremony has been held for a new ambulance hub in Lichfield.

The hub in Eastern Avenue replaces the city’s previous ambulance station which was based on the site of the fire station in Birmingham Road. The move took place on October 15th.

The new premises accommodates 85 staff, 15 ambulances and four rapid response vehicles serving a number of smaller Community Ambulance Stations. It also has a fleet maintenance area where dedicated staff prepare the blue-light vehicles in time for the start of crews’ shifts. This process is known as ‘Make Ready’, originally implemented by the former Staffordshire Ambulance Service and more recently adopted by the rest of the West Midlands region.

Addressing a number of guests, West Midlands Ambulance Service Chairman Sir Graham Meldrum referred to ‘Make Ready’, saying: “It’s really nice to be here in Staffordshire because this is where the whole concept and idea of providing a community-based ambulance station service that was geared to the needs of the patient was conceived.”

Trust Chief Executive Anthony Marsh said: “It’s not by accident that West Midlands Ambulance Service is consistently the best performing ambulance service in our country. And it is the infrastructure investment such as this hub that allows us to provide really good-quality care for our patients and to support our staff to deliver the best possible care and save as many lives as possible in Staffordshire.

Cutting the ribbon Lord-Lieutenant of Staffordshire Ian Dudson said : “I think it is a real privilege to be given the opportunity to open this new hub today. It is the first time I have seen one of these ‘Make Ready’ hubs and I have found it fascinating.” 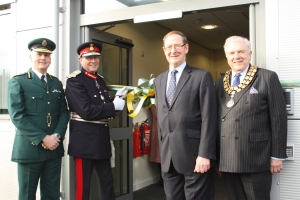 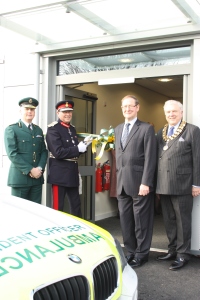