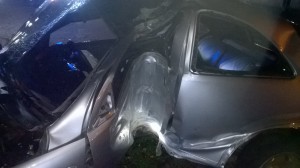 A motorist has had an incredibly lucky escape after his car overturned following a collision with a lamppost in Brierley Hill last night (Wednesday).

West Midlands Ambulance Service was called to the incident at the junction of Farndale Close and Hillfields Road at 10.05pm and sent an ambulance, a paramedic area support officer and a MERIT trauma doctor to the scene.

A West Midland Ambulance Service spokesman said: “Crews arrived to find a 17-year-old man sitting at the roadside who had managed to free himself from his vehicle following a significant collision with a lamppost. The vehicle had suffered a large amount of damage, particularly to the passenger side.

“Crews were told that the seriousness of the impact caused the car to overturn, coming to rest on the driver’s side.

“Following assessment from ambulance staff, the man was treated for a head injury and minor arm injuries.

“He was immobilised with the use of a scoop stretcher and neck collar before being taken to Russells Hall Hospital for further assessment and treatment.

“Thankfully his injuries are not considered to be life-threatening and he has undoubtedly had a lucky escape. Had there been a passenger in the car with him, the outcome could have been very different.”