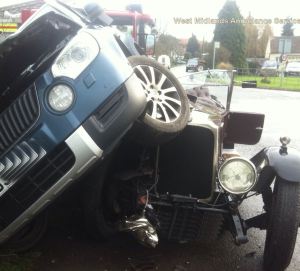 Two people have been taken to hospital following a road traffic collision on the A449 near Ledbury this morning.

West Midlands Ambulance Service was called to the A449 near Much Marcle at just before 11.25am.

An ambulance; a paramedic in a rapid response vehicle; a paramedic officer and the Midlands Air Ambulance from Strensham were sent to the scene.

“One vehicle was found on top of the vintage car, trapping the driver and passenger.

“Both the driver and passenger were fortunate to escape serious injury. The driver, a man believed to be in his sixties was treated for a hand injury.

“A woman passenger also believed to be in her sixties was treated for leg, back and neck pain.

“Both patients were taken to Hereford County Hospital for further assessment and treatment.”