A man has suffered numerous injuries in a collision involving the van he was driving and a heavy goods vehicle on the M6.

West Midlands Ambulance Service was called to the southbound carriageway between junctions 4a and 4 shortly before 9.25am today.

A paramedic, an advanced community paramedic and a paramedic area support officer attended, each in a rapid response vehicle. An ambulance crew and the Midlands Air Ambulance from Cosford also attended.

A West Midlands Ambulance Service spokesman said: “The front of the van ended up wedged beneath the HGV’s trailer. The van’s driver was trapped in his vehicle which had to be winched away from the HGV in order for him to be freed. He had broken both legs and a wrist. He also had a suspected fractured pelvis.

“His injuries were treated at the scene. This included the application of vacuum splints and dressings to the limbs. A pelvic bind was also applied. He was given pain relief, was immobilised and taken by land ambulance to University Hospital Coventry and Warwickshire.” 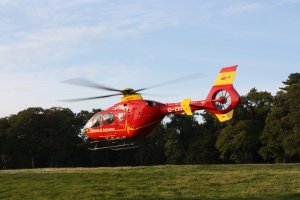