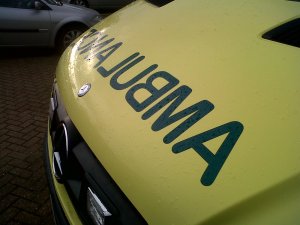 A two car collision has left a woman dead and a man with minor injuries in Shropshire this evening.

West Midlands Ambulance Service was called to the A456 just out of Burford shortly after 5.15pm (Thursday). Two ambulances, a senior paramedic officer, a community paramedic, a BASICS doctor from Mercia Accident Rescue Service (MARS), a MERIT trauma doctor and three paramedics from the Midlands Air Ambulance bases in Cosford and Strensham attended the scene by road.

A West Midlands Ambulance Service spokeswoman said: “Ambulance staff arrived on scene to find two cars which had been involved in a collision. The driver and single occupant from one car, which had reportedly rolled over, was trapped in the wreckage. Sadly, it quickly became apparent to staff that nothing could be done to save the patient, a woman, and she was confirmed dead on scene.

“The single occupant of the second car, a man believed to be in his late 30s, sustained abdominal pain. Upon further assessment paramedics and the doctors ruled out further injuries. The man declined hospital treatment and was discharged on scene.”