A Paramedic from West Midlands Ambulance Service will be back on our TV screens this week as part of a new 10 part series for children’s channel CBBC.

Series 3 of popular children’s programme ‘Operation Ouch’ is a medical series fronted by identical twins Dr Chris and Dr Xand van Tulleken, and is packed with incredible facts about the human body.

The series will also de-mystify for younger viewers what happens when an ambulance is called to an emergency.

West Midlands Ambulance Service Paramedic Jan Vann was filmed responding to emergency calls for the series, and will be seen every week in a feature called ‘on call’.

Jan, who is based in Coventry, said: “It was very enjoyable being filmed doing my job as a paramedic and will hopefully help children understand the roll of the ambulance service in real emergencies.

“It will help take away the fear factor of some of the medical equipment we use and also going in an ambulance. Hopefully it will also help educate youngsters on what kind of situation you should call 999 for medical help.”

In the programme, the two doctors experiment and explore their way through the fascinating world of medicine and biology, showing and explaining the amazing things the human body can do. The series also features animated inserts that explain just how cool the human bodies really is.

Operation Ouch will be aired on CBBC every Tuesday, with the first episode of series 3 being tonight at 5.30pm. (Tuesday 27th January). 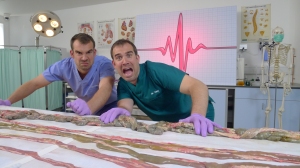 The series is made up of 10 x 30 mins episodes with a feature called ‘on call’ which will show Jan responding to real life emergencies in her rapid response vehicle.