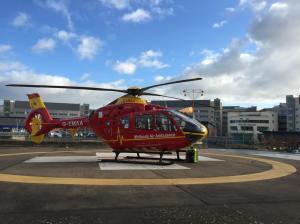 A motorcyclist has been taken to hospital following a road traffic collision on the A46 near Haselor Hill, Alcester earlier today.

West Midlands Ambulance Service was called to the incident at just before 8am.

An ambulance, a paramedic support officer in a rapid response vehicle, together with the Midlands Air Ambulance from Strensham attended the scene.

A West Midlands Ambulance Service spokesman said: “Crews responded to a collision between a motorbike and car on the A46. The motorbike was significantly damaged in the collision.

“Crews treated a male in his forties for head lacerations and back injuries.

“The patient was immobilised using a neck collar and orthopaedic stretcher. He was also given pain relief before being airlifted to the Queen Elizabeth Hospital for further assessment and treatment.

“The female car driver was assessed at the scene but did not require hospital treatment.”