Five people have been injured when a car and a taxi were in a serious collision last night in Birmingham.

West Midlands Ambulance Service were called to the junction of Bristol Road and Priory Road at around 8.30pm. Three ambulances, a rapid response vehicle and a paramedic officer attended the scene.

A West Midlands Ambulance Service spokesman said: “Crews arrived to find two vehicles that had been in a crash.

“The woman driving the car, believed to be in her early 40’s, suffered a serious arm injury.

“The man in his 60’s driving the taxi suffered a back injury. The three passengers travelling in the taxi all suffered multiple minor injuries.

“All emergency service personal worked seamlessly together to ensure the patients were treated as quickly and safely as possible.” 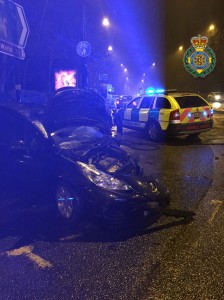