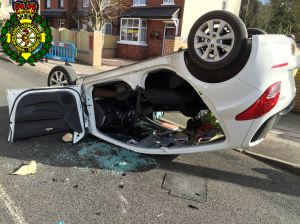 There was a lucky escape for a motorist in Stoke-on-Trent this morning as he escaped uninjured despite his car landing on its roof following a two-car collision.

West Midlands Ambulance Service was called to Uttoxeter Road in Tean shortly after 9.30am and sent an ambulance, a paramedic in a rapid response vehicle, a paramedic area support officer and a BASICS doctor to the scene.

A West Midlands Ambulance Service spokesman said: “Crews arrived to find two cars that had been in collision, one of which had come to rest on its roof.

“The driver of that car, a man in his 80s, was trapped as a result of the incident.

“He was assessed by ambulance staff but remarkably had not suffered any significant injuries.

“He had to be cut free from the vehicle with the help of the fire service before he was taken to Royal Stoke University Hospital for further assessment.

“Given the damage to his vehicle, the man is extremely lucky to have escaped injury.”