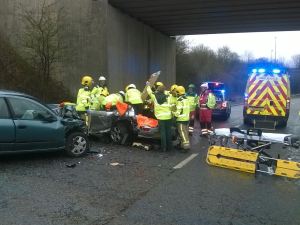 A man has been taken to hospital after the car he was in ended up colliding with a car on the opposite side of the road earlier this morning.

West Midlands Ambulance Service was called to the A38 in Droitwich shortly before 8.00am this morning (Friday). Two ambulances, a paramedic area support officer, a responder paramedic and the Midlands Air Ambulance from Cosford with a MERIT trauma doctor on board attended the scene.

A West Midlands Ambulance Service spokeswoman said: “The two cars had been involved in a collision on the northbound carriageway of the A38.

“Both carriageways were closed by the police to enable to air ambulance to land as near to the collision as possible.

“One of the cars had come from the southbound carriageway. The driver of this car, a 21-year-old man, sustained neck and back pain and a suspected abdominal injury in the collision. The man was extricated from the car with help from the fire service. The man was immobilised with a neck collar and spinal board before being taken by land ambulance to Worcestershire Royal Hospital.

“The driver of the second car, a 28-year-old woman, sustained a graze to her nose but no other injuries. She was discharged on scene.”