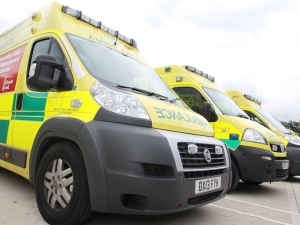 The incident happened on Brinklow Road, near to the Coombe Abbey Hotel in Binley, at 9.20am (Tuesday). Two ambulances, a paramedic area support officer and a doctor from the Warwickshire and Northamptonshire Air Ambulance base attended the scene by car.

A West Midlands Ambulance Service spokeswoman said: “The two car collision resulted in both drivers being trapped in the wreckage.

“The driver of one car, a man believed to be in his 40s, suffered a head and pelvic injury. The driver of the second car, a 72-year-old man, had sustained an injury to his chest.

“Both drivers required extrication from the vehicles with the help of the fire service whilst ambulance staff and the doctor worked to stabilise their conditions.

“Both patients were taken by land ambulance on blue lights to University Hospital Coventry and Warwickshire for further assessment and treatment.”