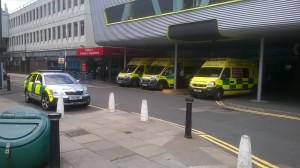 Five pedestrians have been seriously injured following an RTC in Handsworth this lunchtime.

The incident occurred near the junction of Grove Lane and Antrobus Road at around 12pm midday. Five ambulances, a paramedic officer and the Midlands Air Ambulance from Cosford attended the scene. Trauma medics in a rapid response vehicle also attended from the Warwickshire and Northamptonshire Air Ambulance.

A West Midlands Ambulance Service spokesman said: “Crews arrived to find a car that had been in collision with a group of pedestrians.

“Five pedestrians were injured in the collision; a girl believed to be seven years old suffered serious head injuries and went into cardiac arrest at the scene. Advanced life support was carried out by medics. This continued as she was transferred by ambulance to Birmingham Children’s Hospital.

“A boy, believed to be four years old, suffered serious head injuries and was resuscitated by medics at the scene after he stopped breathing for a short time. The boy was transferred by ambulance to Birmingham Children’s Hospital.

“A woman in her 30’s suffered serious head and pelvic injuries in the crash. She received emergency treatment at the scene from medics and was transferred to Queen Elizabeth Hospital Major Trauma Unit for further emergency treatment

“A girl, believed to be 12 years old, suffered serious head injuries and also back injuries. She also received emergency treatment at the scene by medics to stabilise her condition.

“A boy, believed to be 14 years old, also suffered a head injury. Following treatment from medics, both older children were also transferred by ambulance to Birmingham Children’s Hospital.

The hospitals had been pre alerted to the five patient’s serious injuries and trauma teams were on standby awaiting their arrival. Unfortunately the patient’s injuries are considered life threatening.

“West Midlands Ambulance Service would like to pay tribute to its staff for their professionalism and the excellent treatment they provided at what was an extremely difficult and distressing incident. The Trust would also like to thank an off duty nurse and Police Officers who assisted with treatment at the scene.”