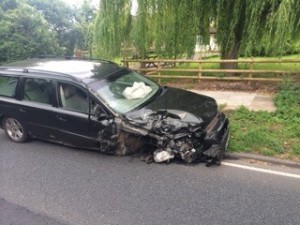 The incident happened at about 3.35pm outside the Travelodge Hotel on Rashwood Hill in Droitwich. West Midlands Ambulance Service sent three ambulances and a paramedic area support officer to the scene.

A West Midlands Ambulance Service spokesman said: “Crews arrived to find four cars with significant damage and four patients, all of whom were conscious throughout and had managed to free themselves from their vehicles.

“One of the cars contained two patients, a male and female, both of whom were in their 80s.

“They were both treated for chest injuries and minor cuts. They were then both transported to the Alexandra Hospital in Redditch on the same ambulance.

“A fifth patient, a man from a third car, was assessed and discharged at scene.

“Given the high speed nature of the road all involved are lucky not to have suffered more serious injuries in the incident.”