A motorcyclist was flown to hospital earlier today after a collision with a car near the Herefordshire border with Wales.

West Midlands Ambulance Service was called shortly after 12.15pm today to the B4362 at Broadheath near Presteigne. The Midlands Air Ambulance from Strensham was sent to the scene.

“The biker had a broken arm and suspected broken ribs. He was immobilised onto a scoop stretcher. Head blocks and a pelvic binder were also used and he was given pain relief.

“He was then flown to Queen Elizabeth Hospital Birmingham.” 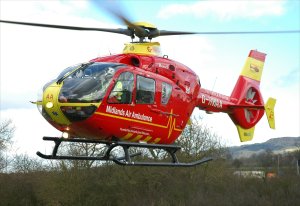