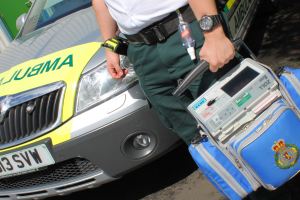 A cyclist has been taken to hospital after collapsing during what was thought to be an organised cycle event in Lapworth this afternoon.

West Midlands Ambulance Service was called to Station Road at the junction of Rising Road at just before 2pm.

An ambulance together with a paramedic support officer and a community paramedic attended the scene.

A West Midlands Ambulance Service spokesman said: “Two nurses and a number of bystanders went to the aid of the cyclist to provide basic life support after he fell unconscious and went into cardiac arrest. An Automated External Defibrillator (AED) located at the village hall was also sent for.

“Crews arrived shortly afterwards and gave the man, thought to be in his sixties, advanced life support shocking him five times with a defibrillator before taking him to Warwick Hospital.

“Ambulance crews praised the two nurses and several bystanders for the help and assistance given at the scene, which undoubtedly gave the patient the best possible chance of recovery.

“The condition of the patient is unknown at this time.”