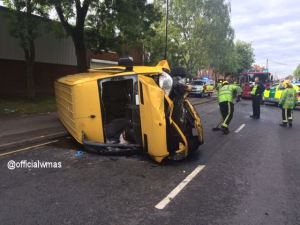 A van and car have been in a serious collision this morning in Coventry.

The crash occurred on the Bedworth Road, Longford at around 6.40am.  Three ambulances and a paramedic officer attended the scene.

A West Midlands Ambulance Service spokesman said: “Crews arrived to find a van and car that had both suffered substantial damage after being in a serious collision.  The van was on its side and the car came to rest between a tree and a road sign.

“The driver of the van, a man believed to be in his 50’s, suffered suspected abdominal injuries.  He received emergency treatment at the scene by medics and his condition was stabilised.  The man was then transferred to University Hospital Coventry and Warwickshire for further treatment.

“The man and woman travelling in the car, both believed to be in their late 20’s, suffered suspected back injuries and also received treatment at the scene by medics.

“Both were transferred by land ambulances to the same hospital for further treatment.

“Considering the damage to the vehicles the occupants were extremely fortunate not to have suffered more serious injuries.” 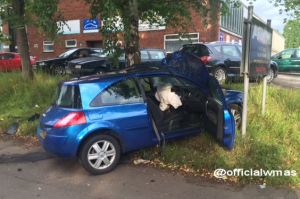 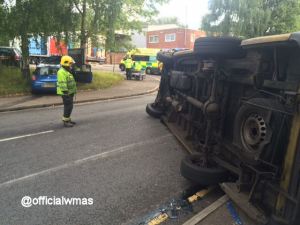