A woman who was left hanging by her seatbelt has been rescued by ambulance staff and firefighters through a panoramic sunroof.

The rescue happened after a two car crash at the junction of Selly Oak Road and Northfield Road in the Bournville area of Birmingham at about 6.10pm on Wednesday evening.

An ambulance and a paramedic area support officer were sent to the scene.

A West Midlands Ambulance Service spokesman said: “On arrival crews found one car that was on its side. The car was resting on the passenger side with the driver still in her seat, mid air being held there by the seatbelt.

“Ambulance staff worked with firefighters to get her out. The car had a large panoramic sun roof, which the fire crews cut out. This allowed the woman, who was estimated to be in her 40s, to be very carefully brought out of the vehicle and immobilised using a neck collar and spinal board.

“After she was taken onto the ambulance, she was assessed fully. Apart from some abdominal pain, she appeared to have suffered only minor injuries. As a precaution she was taken to the Queen Elizabeth Hospital Birmingham for further observation.

“The driver of the second car had managed to get out of the vehicle herself and had been taken into a nearby house for safety. Apart from being shaken, she had no obvious injuries and was discharged with advice from the ambulance staff.”
Ends 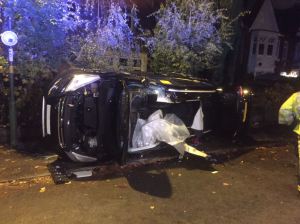