A properly fitted childseat meant a two-year old boy was uninjured when the car he was in collided with another.

The crash happened at the junction of Leegate Avenue and Chichester Drive in Leegomery. West Midlands Ambulance Service was called at 4.40pm and sent three ambulance crews and a paramedic area support officer in a rapid response vehicle. With darkness falling, the crew of the Midlands Air Ambulance from Cosford consisting of a trauma doctor and critical care practitioner attended by rapid response vehicle. 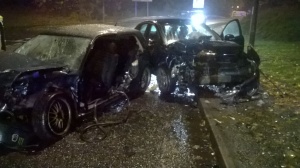 A West Midlands Ambulance Service spokesman said: “The boy who was in the back of the car was securely wrapped up in the childseat which prevented any injury to him despite the significant damage done to both cars by the crash. The driver of this car, a woman in her forties had a minor seatbelt injury and was immobilised with the use of a spinal board and neck collar as a precaution before being taken to Royal Shrewsbury Hospital.

“A man who was the rear seat passenger in the other car had to be anaesthetised by the trauma doctor and his airway maintained. He was taken to Royal Stoke University Hospital. The driver, a man in his twenties, had a minor seatbelt injury and hip pain. He was taken to Princess Royal Hospital for further checks. His front seat passenger was uninjured.”