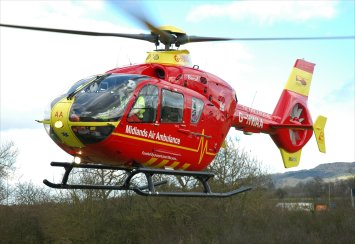 A car driver has been airlifted to hospital after being rescued through the roof of his vehicle following a collision with a house this morning.

West Midlands Ambulance Service was called to Church Street in Cleobury Mortimer, near to the Market Hall, shortly before 11am and sent an ambulance, a medical first responder and the Midlands Air Ambulance from Strensham to the scene.

A West Midlands Ambulance Service spokesman said: “On arrival, crews discovered the driver, a man believed to be in his 80s, trapped inside a severely damaged car.

“After assessing the man it became apparent he was not seriously injured, so a controlled procedure took place to free him from the vehicle.

“Crews worked closely with Shropshire Fire Service, West Mercia Police and an off duty nurse who had stopped to offer assistance to free the man.

“He was immobilised with a KED, a specialist rescue stretcher, and lifted out through the roof after approximately an hour.

“The man was treated for minor cuts to his hand and face as well as back pain.

“He was given pain relief and transported by land ambulance to the nearby air ambulance which had landed on some nearby sports fields. He was then airlifted to Worcester Royal Hospital.

“Ambulance crews would like to thank everyone who offered assistance in rescuing the man from the car.

“Nobody else was injured in the incident.”