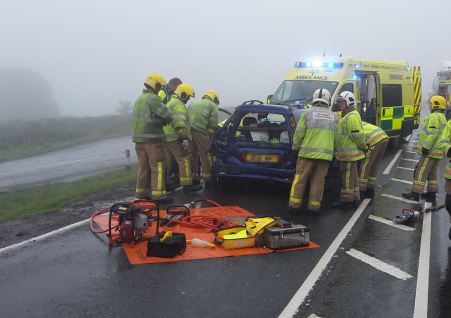 Two people had to be cut free from their car following a collision with a lorry this morning.

West Midlands Ambulance Service was called to the A4117 in Clee Hill shortly before 9.30am and sent two ambulances, a paramedic area support officer and a medical first responder to the scene.

A West Midlands Ambulance Service spokesman said: “On arrival, crews discovered a car with rear end damage and a lorry that had been involved in collision.

“There were two patients, both from the car and both of whom were trapped as a result of the damage caused.

“After assessing the patients, ambulance staff worked closely with the fire service to free them after the side of the car had been cut away.

“The passenger, a woman believed to be in her 60s, was immobilised with the use of a neck collar and spinal board and treated for a neck injury before being taken to Hereford County Hospital.

“The man, also believed to be in his 60s, was also treated for neck pain and travelled to the same hospital.

“The lorry driver, a man, was uninjured in the incident.”