A car driver has received emergency treatment from ambulance staff and been taken to hospital after her car crashed into a tree in the early hours of this morning.

West Midlands Ambulance Service was called to Albany Road, Coventry, at 3.10am and sent an ambulance and a paramedic area support officer to the scene.

A West Midlands Ambulance Service spokesman said: “On arrival, crews discovered a car that had suffered significant damage after colliding with a tree.

“The damage suffered to the car meant accessing the patient was difficult and ambulance staff had to work carefully to assess the driver, a woman believed to be in her 20s.

“She was treated for a neck injury and due to the crew’s concerns about her condition, she was quickly transported to University Hospital Coventry and Warwickshire on alert.” 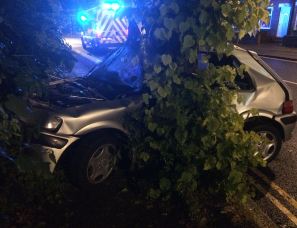