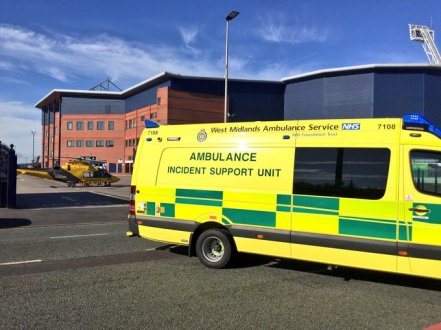 A pedestrian has been seriously injured following a collision with a car outside West Bromwich Albion Football Club this morning.

West Midlands Ambulance Service was called to Halfords Lane, West Bromwich just after 7.25am and sent two ambulances and a paramedic officer to the scene. The Derbyshire and Rutland Air Ambulance also attended, landing in the East Stand car park of the football club.

A West Midlands Ambulance Service spokesman said: “Crews arrived to find a woman lying in the road and a car that had suffered significant damage in the collision.

“The woman, who is believed to be in her 30s, remained conscious throughout but was treated for fractures to both legs, a pelvic injury and a minor head injury.

“Once crews had stabilised her condition she was immobilised and given pain relief at the scene before being taken to Queen Elizabeth Hospital, Birmingham by land ambulance.

“The driver of the car, a woman, was not injured in the collision.”