A man was trapped for about 90 minutes in the wreckage of a car after a collision with a van.

The crash happened at 9.15pm last night on the A41 at Sandford to the south of Whitchurch in Shropshire.

An off duty community first responder from Albrighton came across the crash only a few minutes after it had happened and stopped to provide assistance.

Three ambulances, a rapid response vehicle, a paramedic area support officer, a BASICS Emergency Doctor and the MERIT Trauma doctor were all sent to the scene.

“The driver of the car was the most serious.  The man, estimated to be in his 20s, had suffered multiple injuries.  Working with firefighters, it took about an hour and a half to extricate him due to the damage to the vehicle and his injuries.

“He was immobilised, had a pelvic binder put in place and had his leg splinted before being taken on blue lights to the major trauma centre at Royal Stoke University Hospital.

“The front seat passenger, a woman who was estimated to be in her late teens had also suffered multiple injuries and after treatment at the scene was taken to the same hospital by an ambulance travelling on blue lights.

“The man driving the van had managed to get out of the vehicle himself.  He had some facial lacerations and ankle pain.  After assessment, he was taken to Princess Royal Hospital in Telford.” 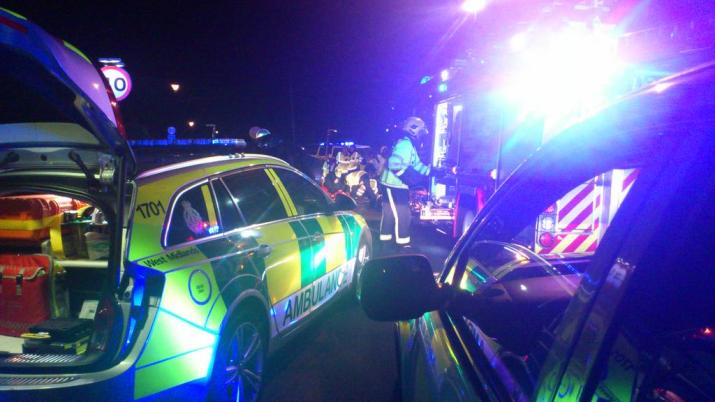