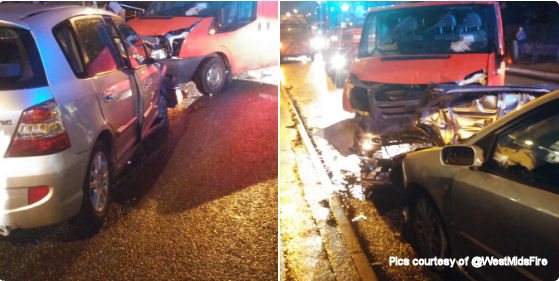 A collision involving a car and a van left three men in the back of an ambulance last night.

A West Midlands Ambulance Service spokeswoman said: “The collision caused substantial damage to both vehicles. The driver of the car, a man in his 30s, sustained injuries to his back, neck, chest, abdomen and arm. Ambulance staff were also concerned he had a head injury. He was given treatment on scene and stabilised before being taken to Queen Elizabeth Hospital Birmingham.

“The passenger of the car, a second man in his 30s, suffered a suspected fracture to his arm as well as multiple minor injuries to his finger, neck and chest. He was given pain relief before being taken to Sandwell Hospital.

“The driver of the van, a man in his 70s, was being cared for by his family who were at the scene when ambulance staff arrived. He was assessed and was found to have sustained chest pain as well as lower leg injuries. He too was given pain relief before being taken to Sandwell Hospital for further treatment.”