A lorry driver had to be cut out of his cab following a collision with a second lorry this morning.

West Midlands Ambulance Service was called to Weston Road in Stafford at 6.55am and sent an ambulance, a paramedic area support officer, a BASICS doctor and a MERIT trauma doctor to the scene.

“A West Midlands Ambulance Service spokesman said: “On arrival at the scene, crews discovered a man, believed to be in his 40s, who was trapped inside his cab as a result of the collision.

“Ambulance staff worked closely with the fire service to cut the man free before treating him for serious arm and leg injuries as well as a suspected chest injury.

“He was immobilised and given pain relief before transported to Royal Stoke University Hospital for further assessment. The MERIT doctor travelled with the patient to continue treatment en-route to the hospital.

“The driver of the second lorry was uninjured in the incident.” 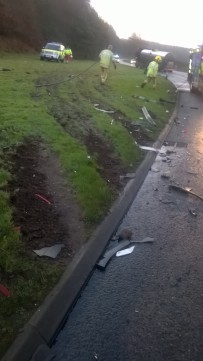