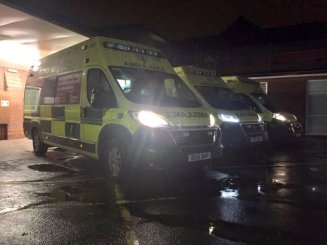 Three people have been treated for multiple injuries at the scene of a two car collision, two of whom were seriously injured.

West Midlands Ambulance Service was called to Coventry Road, near to The Griffin Inn, in Nuneaton shortly after 9.50pm last night and sent three ambulances, a paramedic area support officer, a MERIT trauma doctor and the Warwickshire and Northamptonshire Air Ambulance Critical Care Car to the scene.

“One of the cars still had the driver trapped inside, a man believed to be in his 30s.

“Crews assessed him whilst still inside the vehicle before working closely with the fire service in order to free him.

“He was suffering from a slightly reduced level of consciousness and treated for serious head, leg and pelvic injuries. He was immobilised and given pain relief before being taken to University Hospital Coventry and Warwickshire.

“The doctor and critical care paramedic from the Critical Care Car travelled on the ambulance to continue treating the patient enroute.

“The driver of the second car, a man thought to be in his 20s, managed to free himself from the vehicle.

“He was fully conscious but received treatment from ambulance staff for head, face, back, abdominal and shoulder injuries.

“Pain relief was administered and the man was immobilised before being taken to the same hospital.

“The passenger from the second vehicle, another man believed to be in his 20s, was treated for less serious back, chest, arm and knee injuries and also taken to University Hospital Coventry and Warwickshire.”