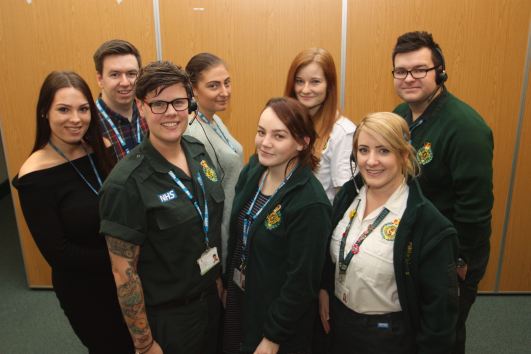 New call assessors from a wide range of backgrounds have joined West Midlands Ambulance Service for a new career saving lives behind the 999s.

In October and December 2016, the Trust further bolstered its call assessor numbers by employing 28 new staff to answer 999 calls in its two Emergency Operations Centres (EOCs) in Brierley Hill and Stafford.

With more than 3,000 emergency 999 calls received a day, the service is the third busiest in the country. During a 12-hour shift, a call assessor will answer a staggering 70 999 calls, everything from coughs, twisted ankles and cut fingers through to life threatening calls about chest pain, strokes and serious blood loss.

From a retained firefighter, prison officer, retail assistant and mental health worker, the new call assessors bring a wide range of skills and backgrounds which can only benefit the Trust.

As our control room staff will tell you, it’s one of the most rewarding jobs they’ve ever done. Annie-Rose Blackwell applied for the role of call assessor in October last year, three months later she was answering 999 calls. Annie said: “I was already working for the Trust as a call taker for patient transport but when the job in EOC came up I wanted to experience more of an emergency environment. The training proved intense and at times difficult but the support given by the trainers made the process enjoyable.”

As Annie explains, it’s not just ambulance crews out on the road that help to save lives: “My proudest moment in my new role so far is helping a patient in cardiac arrest and hearing them breathe again.”

Jamie Dubczyk, left his role at Dudley Council to become a call assessor in August. Jamie said: “I wanted a change of career and to work for an organisation where there’s progression. There are challenging days and then days which go smoother than others. It’s an incredibly rewarding job; I’ve helped to save three lives since I joined!”

Becoming a call assessor means completing an intense three-month in-house training programme. Not only do our call assessors receive comprehensive training to use the Trust’s computer systems, they complete an accreditation to use the national telephone triage system, a nationally recognised first aid qualification and learn about health and physiology. Once the classroom training is complete, it’s time for mentoring in the Emergency Operations Centre where they take live 999 calls with an experienced call assessor before undertaking a final assessment where they are signed off as ready to take 999 calls alone.

Liz Parker, the Trust’s Head of EOC Development and Training, said: “You don’t need a university degree or healthcare background to apply for the role as a 999 Call Assessor with us. You’ll receive in-depth training and be supported by the Trust’s EOC training team who specialise in delivering the necessary skills to answer a 999 call.

“If you need to make a 999 call you can be confident that the person answering your call will help you through what can be an emotional and sometimes traumatic experience. If necessary they will arrange for an ambulance to attend, on other occasions they may suggest an alternative route for the patient to the GP or another local healthcare service. Whatever the outcome they will provide the best care for the patient throughout the call.”