A woman has been injured after her car left the motorway and went through small trees and ended up in a holly bush following a collision with a lorry.

It happened on the northbound carriageway of the M6 Toll between junction T1 and T2 at about 12.15pm today (Wednesday).

Two ambulances and a senior paramedic officer were sent to the scene.

A West Midlands Ambulance Service spokesman said: “The Ford Mondeo had collided with a large goods vehicle.  The rear tail lift of the lorry was badly damaged.

“The car then left the motorway and went up the embankment going through a number of small trees and ending up embedded in a holly bush.

“The 41 year old woman driving was briefly knocked unconscious.  She was trapped and was complaining of neck and back pain as well as suffering facial injuries.

“After being assessed by ambulance staff while still in the vehicle, they worked with firefighters to extricate her.  The rear seats were removed and after being placed onto a spinal board, was brought out through the rear hatchback door.

“After further assessment and treatment, she was taken to Good Hope Hospital.

“The lorry driver was unhurt.” 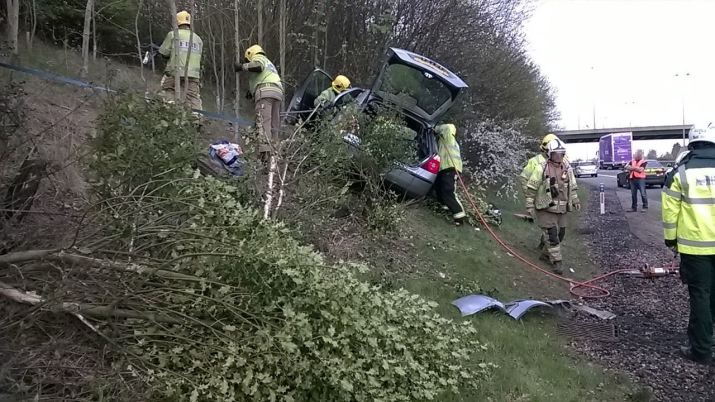