Three people have been treated by ambulance staff and taken to hospital following a collision involving two HGVs this morning.

West Midlands Ambulance Service was called to Shuckburgh Road in Napton on the Hill in Warwickshire shortly after 10.10am. Four ambulances, a paramedic officer and the Warwickshire and Northamptonshire Air Ambulance attended the scene.

A West Midlands Ambulance Service spokesman said: “On arrival at the scene, crews discovered two lorries that had suffered considerable damage in the collision and three patients.

“The driver of the first vehicle, a man in his 30s, was assisted out of the cab and treated for chest, leg and arm injuries. He was immobilised with the use of a scoop stretcher and given pain relief.

“From the second vehicle, a man in his 20s, who was a passenger, was also assisted out of the cab and treated for a cut to the head as well as chest and leg pain. He too was immobilised and received pain relief.

“The driver of that vehicle, a man in his 50s, managed to get himself out of the lorry and was treated for back pain.

“All three patients were transported to University Hospital Coventry and Warwickshire by land ambulance.” 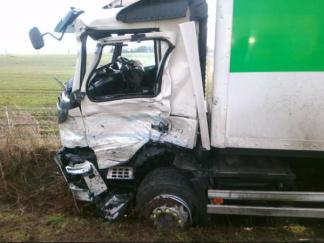