A motorcycle rider has been airlifted to a major trauma centre after crashing this morning.

The incident happened at about 7.40am on Worcester Road by Hartlebury Trading Estate in Hartlebury, Worcestershire.

A number of passers-by including off-duty nurses and a firefighter came to the man’s aid before an ambulance and then the Midlands Air Ambulance from Cosford arrived.

A West Midlands Ambulance Service spokesman said: “The staff were told that it was a single vehicle crash involving a lamppost.

“The rider, a man in his 30s, had suffered some nasty injuries.  Working together, the crew and air ambulance staff provided pain relief before applying splints after manipulating the injuries.

“The air ambulance, which had landed in the road nearby, then flew the man to the major trauma centre at the Queen Elizabeth Hospital Birmingham.

“Whilst the man suffered serious injuries, the crews remarked that the fact he was wearing full biker leathers and a helmet reduced the level of injuries.” 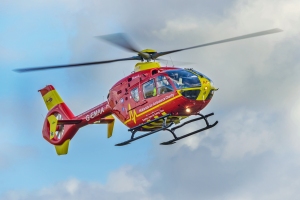