A teenager has died after an RTC despite the efforts of ambulance and hospital staff.

The incident happened on Wolverhampton Road in Quinton last night (Sunday 9th September) at about 11.45pm.

An ambulance was on scene less than 3 minutes after the first 999 call and was backed up by a second ambulance, a paramedic officer the the MERIT trauma doctor and critical care paramedic.

A West Midlands Ambulance Service spokesman said: “On arrival ambulance staff found an 18-year-old was whose motorbike had hit a tree.

“Ambulance staff carried out life support and advanced trauma care at the scene before taking the man to the major trauma centre at Queen Elizabeth Hospital Birmingham.

“Sadly, he died later at hospital.”

Anyone with information can call the West Midlands Police Serious Collision Investigation Unit on 101; quoting log number 2845 of 09/09/18. 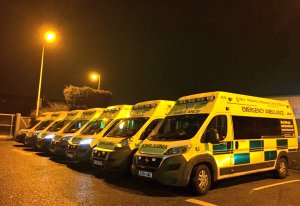