Having retired, I was looking to fill my newly acquired spare time, volunteering.  My Father in Law was taken ill whilst visiting our home in Solihull and we dialled 999.  First to arrive were two Community First Responders.  I now had an idea.

I joined the charity FastAid and was soon on the eight-day West Midlands Ambulance Training Course for CFRs.  To raise funds for my kit I completed a sponsored cycle ride ‘off road’ from the Irish Sea to the North Sea, the biking equivalent of the more famous Coast to Coast.  Family, friends and neighbours were very generous and I was soon equipped to respond in my own car, using my mobile phone and limited equipment.

That was 10 years ago. So much has changed.  Within FastAid all CFRs have access to a scheme car, each carries vital lifesaving equipment such as a portable patient monitor with ECG readings, an advanced defibrillator; adult and paediatric resuscitation equipment; oxygen, airway suction; neck collars; major trauma dressings, helmets, even smoke escape hoods and sterile water for use after an acid attack.  Because of the high visibility markings and safety lighting, scheme cars can be sent to calls such as road traffic collisions and are part of the Ambulance Service major incident plan

My first real test came in year one.  I attended a cricketer who had collapsed.  I was on scene in three minutes.  He was in cardiac arrest.  After 3 shocks from the defibrillator, a cardiac output was restored and he began breathing for himself.  He went on to make a complete recovery.  At the time he was 19 years old.

Because I respond in an urban environment, days can be busy and no two days are the same.  Last year I attended 377 emergency calls including 15 cardiac arrests.  I never know what each day will bring or how each call will develop.  That’s part of the interest I have in being a CFR.  That, and adding to a good patient experience.  I’ve been to a 103 year old, at the birth of two babies and every age in between.  Because we respond in our local community, we can be on scene quickly to start lifesaving treatment, begin clinical care and provide reassurance to patient and relatives before the ambulance arrives.  I am on scene first in 90% of calls.

The support we receive from West Midlands Ambulance is fantastic.  That comes from the crews who back us up, from our Community Response Manager, the guys who issue us kit and even the occasional helicopter crew.  That support also extends to recognition for successful resuscitations, commendations for a job well done and thanks for exceptional service.  In 2017 I was given the honour of Volunteer of the Year. 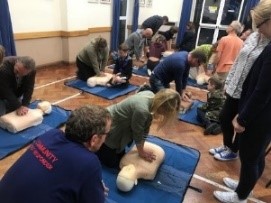 As well as responding, FastAid volunteers FastAid volunteers provide free training in the community, teaching lifesaving skills such as cardio pulmonary resuscitation (CPR); what to do if someone has a heart attack, is choking or bleeding and also look after local public access defibrillators.  They can also be seen at local events such as carnivals and fetes.

In 2016, FastAid was awarded the Queens Award for Voluntary Service, the MBE for voluntary groups.  Being a CFR is a fantastic way to serve the community where we live or work.  It can be challenging but it is always rewarding.